About the Bernard Healthcare Center 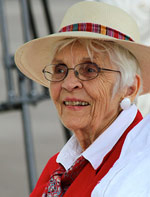 It is with great sadness that we acknowledge the passing of Jeanne Bernard on July 5th, 2020. She was an inspiration to us all.
Her obituary can be read here.

The Free Clinic of Franklin County, Inc. is a private501(c)(3), independent, non-profit organization governed by a community Board of Directors. Bernard Healthcare Center is a division of FCFC.

A County steering committee, led by Jeanne Bernard, completed a needs assessment which recognized the need and, with the help of many concerned citizens, the clinic opened with a one (Monday) evening clinic/week on November 12, 1992.  The clinic was staffed solely by volunteers.  Quickly the clinic realized the need for chronic care was great and began a diabetes program which has grown over the years.  As years progressed, the clinic grew and needed ever increasing resources, man-power, and space.